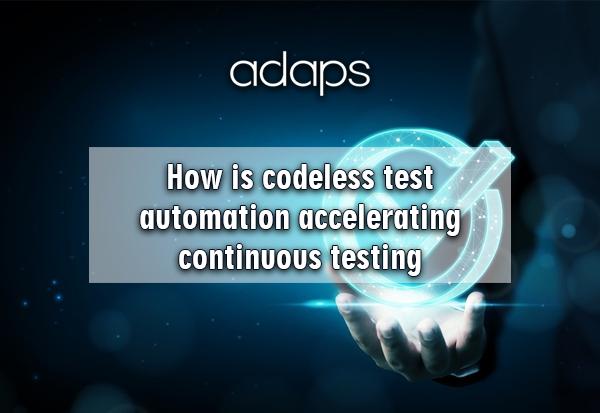 With the advancements in technology, the software industry is observing many changes. Testing is being the part of the software platform, is also advancing to incredible heights. The testing evolved from manual testing to record-and-playback tools, and then to test automation and now to codeless test automation, we have passed a long path. We know that only innovation is constant; there will be new advancements to make this journey more productive.

What is meant by Codeless Test Automation?
Usually, when we are speaking about automation testing, it means automation testing by scripting or coding—test cases coding is performed in programming languages like Python, Java, Ruby etc.The scripts for testing are integrated with frameworks like Cucumber, TestNG, Selenium Webdriver to make the scripts exceptional.

How to Accelerate Continuous Testing through Codeless Test Automation?
Prior to accelerating your continuous testing, it is crucial to adopt automation testing and plan the exercise accurately. The strategic outlook must include continuous integration, constant feedback, and progressive delivery. Using the DevOps approach and tools is vital to support in performing this process, and it is highly recommended. It is essential to outline your Continuous Testing efforts in an effective way for hastened integration and delivery of a perfectly build application and timely release.

Determining the detailed scope
It is essential to focus on all testing types; however, companies find themselves aggressively moving out API testing while neglecting a series of other tests that must be in place. It is essential to have a defined scope of testing specifications and the application functionalities beforehand.

Cutting down complexities
Break down the functionality of the application into multiple modules to build workflows. This modular strategy for testing will make it simpler to backtrack bugs and squeeze the testing roadmap as needed.

Popular Tools for Codeless Test Automation
There are several codeless test automation tools in the market. Here we have listed a few.

Test Complete: It uses keyword-driven testing to facilitate codeless test automation. Each action is connected with a keyword that can be attached in a script by the user.

Testsigma: This is a cloud-based automation testing platform. The test cases can be automated by utilising simple English. The implementation and reporting are managed on the cloud.

Ranorex: Ranorex enables to record and playback for easier scenarios and coding for the difficult ones.Ghost inspector: This tool records user actions in the user interface (UI) and correlates screenshots too,
to facilitate codeless test automation.

Adaps is now a Great Place to Work certified

Adaps founded in 1964, is an acronym for Australian Data Processing Systems and is one of the first 100% Australian owned & managed company that imported IBM Data Processing Machines for processing the punch cards used for payroll processing. Since then, Adaps has evolved and as a leader in provision of IT based services for many reputed client including but not limited to Federal Government of Australia, State Governments of NSW, Victoria and Queensland, major Banking institutions like NAB, ANZ, public sector giants like Essential Energy and more than 100+ large and medium companies across Australia.

Adaps has a long Australian history of partnering and bringing value to our clients. We endeavour to ensure that our client relationships progress from being ‘Vendors’ to ‘Partners’. This progress is only possible through the continuous efforts to understand and appreciate each client’s requirements and fine-tune our service offerings to adapt to changing circumstances and meet business needs.

Adaps OEM Partnerships enable, not only the access, but also world class Training and Synergy from global development & deployment experiences that can ensure easier success in major implementations.

To drive its differentiation, Adaps continues to expand its service portfolio to specialised and next-gen services such as mobile testing, UX Testing, DevOps/continuous Testing, and Data migration Testing. Newer offerings include testing of AI, blockchain, and chatbots. Adaps invests a significant percentage of its revenues, to internal R&D, and is in the process of creating its IPs (Intellectual Properties) in support of such endeavour.