Everything you need to Know About Functional Testing 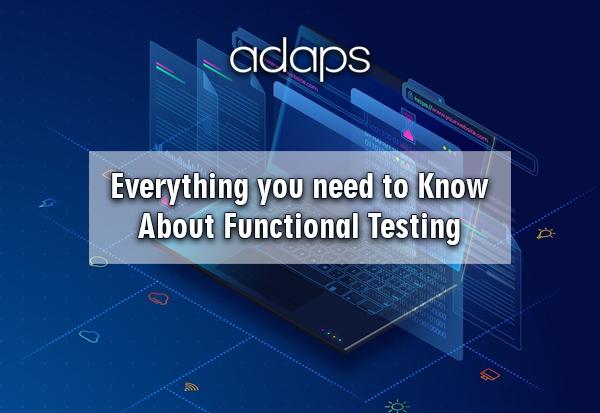 Functional testing is one of the Black-box testing types as the application source code is not counted during the process of testing. The primary purpose of this form of software testing is to test every functionality of the application by giving specific inputs and verifying the outputs upon the functional requirements.

Simply it is a form of testing that verifies whether the software operates as per user expectations. Functional testing is also identified as specifications-based testing as this testing type entirely depends on the specifications of the program. QA engineers mainly focus on validating the system upon the functional specifications and verifies the features upon user specifications.

Why Functional Testing is Essential?
Functional testing is essential in validating the functionality and quality of the software through this testing QA teams test the software functionality based on the Software Requirements Specification (SRS). It assures the system performs as per the specifications of the user. This testing method is used to test specific error conditions, usability features, accessibility features, and other vital software functions.

Selenium
One of the most popular open-source automation tools meant for functional testing of web applications is Selenium. There are various components embedded in this suite to manage several automation testing attributes. Selenium tool supports several operating systems and browsers. It also provides a playback tool for monitoring functional tests and runs on various operating systems like Linux, Windows, and Mac.

TestComplete
TestComplete is a commercial functional automation tool for fair testing of mobile, desktop, and web applications. It supports different types of scripting languages, including C++, C#, VBScript, Python, JavaScript, and others. You can also get a record and playback feature for the purpose of testing process review.

Sauce Labs
Sauce Labs is the biggest scalable automation cloud for web, mobile, and hybrid applications. It is a secure platform that supports the firms to improve their development cycles that helps to enhance the quality of the software.

Functional Testing Gives a Great Satisfaction for End-users
Functional testing ensures that the software gives satisfying performance for the end-users. The users will get the easy-way-out through using the application.

Functional Testing Ensures No Defect Software
Once the specific software goes through the phase of functional testing, all the errors and bugs will be identified and then removed to streamline the functions of the software. So, you will get no defect software that is free from errors and bugs.

Functional Testing Gives Better Security
The attributes of functional testing will also look at the software security aspects. It will give a clear decision of whether the application is secure or not for storing the users’ sensitive data.

Conclusion Thoughts
Functional testing is an essential job in the software development process. Without this testing, the software may not perform well. Hence, the developer needs to ensure that there will be no errors and bugs in the application before it is going to launch. The functional testing method results in delivering quality software that ensures end-user satisfaction

Adaps is now a Great Place to Work certified

Adaps founded in 1964, is an acronym for Australian Data Processing Systems and is one of the first 100% Australian owned & managed company that imported IBM Data Processing Machines for processing the punch cards used for payroll processing. Since then, Adaps has evolved and as a leader in provision of IT based services for many reputed client including but not limited to Federal Government of Australia, State Governments of NSW, Victoria and Queensland, major Banking institutions like NAB, ANZ, public sector giants like Essential Energy and more than 100+ large and medium companies across Australia.

Adaps has a long Australian history of partnering and bringing value to our clients. We endeavour to ensure that our client relationships progress from being ‘Vendors’ to ‘Partners’. This progress is only possible through the continuous efforts to understand and appreciate each client’s requirements and fine-tune our service offerings to adapt to changing circumstances and meet business needs.

Adaps OEM Partnerships enable, not only the access, but also world class Training and Synergy from global development & deployment experiences that can ensure easier success in major implementations.

To drive its differentiation, Adaps continues to expand its service portfolio to specialised and next-gen services such as mobile testing, UX Testing, DevOps/continuous Testing, and Data migration Testing. Newer offerings include testing of AI, blockchain, and chatbots. Adaps invests a significant percentage of its revenues, to internal R&D, and is in the process of creating its IPs (Intellectual Properties) in support of such endeavour.